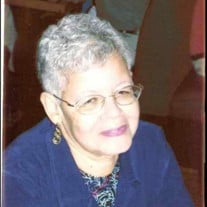 Virma J. Bentley Born November 20th, 1943, passed away suddenly at her home in Hesperia, CA January 4th, 2021. She was born in Tuskegee, AL, and a longtime resident of Bridgeport, CT and New Castle, DE. She was preceded in death by Father Ernest... View Obituary & Service Information

The family of Virma J. Bentley created this Life Tributes page to make it easy to share your memories.

Send flowers to the Bentley family.