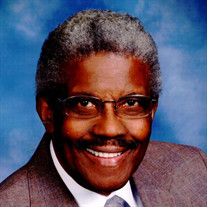 Precious in the sight of the Lord is the death of his saints. Psalm 116:15 Robert Lee Cotton was born April 26, 1940, to the proud parents of A.J. Cotton and Ruth Gray- Cotton in Rose Hill, MS. He received Christ an early age and was baptized... View Obituary & Service Information

The family of Mr Robert Lee Cotton created this Life Tributes page to make it easy to share your memories.

Precious in the sight of the Lord is the death of his saints....

Send flowers to the Cotton family.