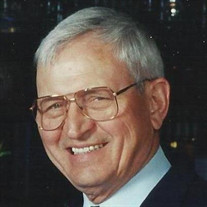 Mike Steve Bujdos was born April 3, 1932 in Cleveland, OH and went home to be with our Lord On April 20, 2015 at Valley Crest Memory Care in Apple Valley, CA. Mike is survived by his wife, Wilma Bujdos of Apple Valley, CA, daughter Susan Henson of Apple Valley, CA, son Mark Bujdos of Leed, UT, son Paul Torgerson of Apple Valley, CA, granddaughter Alyssa Hinde of Apple Valley, CA, and sister Alojzia Dubovska of Kosice, Slovak Replublic. When Mike was 7 months old his parents, Michael and Elizabeth (naturalized U.S. citizens) were prompted by the economic pressures of the great depression to return to the Bujdos family farm in Czechoslovakia. With the German occupation of Czechoslovakia in 1939 the Bujdos, family found themselves under the domination of the Nazis, forced to house and feed a group of German soldiers first and live on whatever was left over for them. The end of World War II terminated the Nazi rule but was immediately replaced by an even worse subjugation imposed by the Russian communists; Mike’s childhood from the age seven to fifteen was a study in misery. Mike graduated high school at age fifteen and due to his U.S. citizenship, and with assistance from the U.S. consulate in Prague; he was able to return to the United States. After living on his own for four years Mike joined the U.S. Air Force and served with distinction from 1951 to 1955, making significant improvements to the operation and efficiency of aerial reconnaissance cameras. Mike’s career as a tool maker included maintenance and repair of tooling for the cement industry and production of tooling for medical equipment, aircraft engines, space craft, and sports equipment. Mike retired from Titleist as a Master Tool Maker in 2004, having made golf club casting masters for many golf notables including Phil Mickleson. Shortly after retiring Mike and Wilma bought a home in Sun City where Mike eagerly pursued his passion for gardening and wood working. This gentle follower of Jesus will be fondly remembered and missed by all who came to know and love him.

The family of Mike Steve Bujdos created this Life Tributes page to make it easy to share your memories.

Send flowers to the Bujdos family.