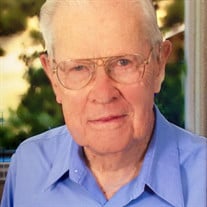 JOSEPH FRANCIS PENN 1917 - 2022 Joseph F. Penn, age 104 and 8 months of Hesperia, CA. passed away on January 5, 2022 at Victor Valley Global Medical Center in Victorville, CA. Joseph Francis Penn was born April 24, 1917 in Hollywood MD, to Joseph Francis Rowe Penn and Susan Powers (Hall) Penn. In 1919 he traveled by ship to South Africa where his parents began their service as Missionaries with the Church of the Nazarene. On completing his high school education he returned to the United States to attend Pasadena Nazarene College in Pasadena CA. Here he met his future wife, Ellen Pittenger. On June 15, 1942 they were united in marriage at Bresee Church of the Nazarene in Pasadena CA. Following their marriage they began their service in ministry with his first appointment as pastor of the Gridley Church of the Nazarene in CA. He was ordained as an elder in the Church of the Nazarene in 1943, then in 1945 they were appointed as Missionaries and returned to South Africa were they served in various capacities for 40 years. In 1985 they retired and returned to the United States and made their home at Casa Robles the Church of the Nazarene Retirement Center in Temple City CA. In 2012 Joe moved to Hesperia CA to live with his son and daughter-in-law, and be closer to other family. One of his life’s enjoyments was singing, he was a member of many quartets singing bass from the time he was a teen until he was over 100 years of age. His entire life was devoted to service to God. His prayer for his loved ones was: “That each of the loved ones would live in the center of Gods will and be the blessing they should be in this beautiful world, but yet a world of great need.” He is survived by his son David (Ruth) Penn Hesperia CA, daughters Beverly (Wayne) Strickland New London MN, and Marilyn Everett Hesperia CA, seven grandchildren, fifteen great grandchildren and one great great granddaughter. His wife Ellen (2011), his brothers Daniel (Fern) and John Slivanus, his sister Marion (Eugene)Denney and son-in-law Mike Everett, preceded him in death.

The family of Mr Joseph Franicis Penn created this Life Tributes page to make it easy to share your memories.

Send flowers to the Penn family.