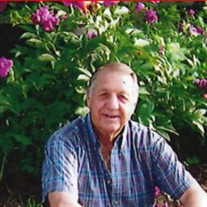 Not sure what to send?

Howard "Soupy" Roth, 89, of Hesperia, California passed away on Jan 6, 2022 in Victorville surrounded by his children after enduring a short illness. He was born on February 10, 1932 in Holyoke, Colorado. As with most families who lived near Holyoke, he grew up and worked on his family farm which is where he acquired his great work ethic. Howard started 1st grade at a country schoolhouse at the age of 4 years old and graduated high school at the age of 16 years old. He was a naturally-gifted athlete and excelled at basketball, baseball, and football. This began his lifelong love of sports both as a participant and spectator. In 1951 he joined the United States Marine Corp and served until he was honorably discharged. After being discharged from the Marines, he attended Western State University and obtained a degree from Trinidad State Jr. College. In 1960 he started his career as a heavy equipment operator with the Los Angeles County Fire Department. Throughout his 20 year career he held many ranks including obtaining the rank of Fire Captain. In addition to his career at the fire department, he obtained his contractor’s license and built numerous houses over the years. He became known as the guy who could build or fix nearly anything. He married Wayman and had 4 children that rounded out their family. They raised their family in Sylmar, Ca and were very active in their church First Lutheran. He served his church family by working around the school, church, or parsonage, putting to work his abilities to fix or build anything. He was very active in all his kid’s life of school, sports and all other activities. In 1974 his son Webb was tragically taken from his family in an accident. After sons Richard and Robert graduated high school Howard, Wayman and their daughter Susan moved to the High Desert in 1976. They enrolled their daughter in Hesperia Christian School and became very active and involved in both Hesperia Christian School and Hesperia Community Church. He used his contracting skills and knowledge around the church and school with numerous projects including helping and overseeing the completion of their gymnasium. Howard also extended his service to others in his church family and other community members by helping them in any way he could. Sadly in 1985 Wayman passed away after a lengthy illness. This left Howard in a new role of single father to his daughter who was still in high school at the time. In 1988 he was elected to the very first City Council in Hesperia, and in that capacity was able to serve more broadly the people of Hesperia. He dearly loved his grandkids and great-grandkids and stayed connected and involved with their lives. Along with a group of very good friends, he spent many hours in a shop building different woodworking projects including toys and cars for missionaries to deliver to kids around the world. He was loved by so many, and in return he loved them all and faithfully prayed daily for each. His ultimate goal in life was to be a testimony for his Savior, and held onto hope that all would find salvation in Jesus. Howard is preceded in death by : his parents Ernest and Regina Roth, his sister Laveda Roth, his sister Florence Simonian, his loving wife Wayman Roth, and his son Martin "Webb" Roth. He is survived by his brother Vern Roth, his brother Don Roth, his son Richard Roth (Linda), his son Robert Roth, his daughter Susan Roth, his 8 grandkids, his 9 great grandkids, and numerous nieces and nephews. Howard will be buried next to Wayman at Riverside National Cemetery. A memorial will be held at Hesperia Community Church on February 5, 2022 at 11 a.m. Condolences to his family can be sent to : Howard Roth Family, PO Box 401361, Hesperia, Ca 92340. In lieu of flowers, the family asks that you please make a donation in his name to Hesperia Christian School, 16775 Olive St, Hesperia, Ca 92345.

Howard "Soupy" Roth, 89, of Hesperia, California passed away on Jan 6, 2022 in Victorville surrounded by his children after enduring a short illness. He was born on February 10, 1932 in Holyoke, Colorado. As with most families who lived near... View Obituary & Service Information

The family of Mr. Howard -" Soupy" - Roth created this Life Tributes page to make it easy to share your memories.