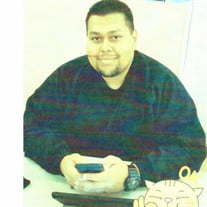 Christopher passed away in Fontana, California in the early morning of November 23, 2021 at the young age of 28. Christopher is survived by his mother Beatriz Marina Moreira and his siblings, Jessica Moreira, Debora Cruz, Matthew Robinson Moreira and Steven Moreira. Alongside his grandparents, music band- The Band Aids, uncles, aunts, cousins, nieces, and nephews. Christopher was born on May 17th, 1993, in Pomona, California to Robinson Estuardo Moreira and Beatriz Marina Moreira. He was one of 5 Children. He was raised in Victorville, California. At a young age Chris began his journey in music, singing, and learning the Piano, from there on he began his passion of learning more musical instruments and finding a deeper meaning in music. He graduated from Silverado High School in 2011. Chris also graduated from Victorville Community College with a total of 3 degrees. He was so smart and talented, Chris loved learning new things, especially when it came to music and cars. Chris was loved by so many in this world. He made an impact in many lives. He was a very kind, genuine, and selfless person. He was always there for anyone who needed him. Chris would light up the room with his smile, even just his laughter. We were so blessed to have him, Chris left us with many special memories that we will never forget. He served the Lord with all his heart and we had the honor to be led into the presence of the Lord every time he worshipped. We are all going to miss him dearly and we know that Chris is with the Lord rejoicing. With Lots of Love : Grace M Lagos -- Jessica Moreira

Christopher passed away in Fontana, California in the early morning of November 23, 2021 at the young age of 28. Christopher is survived by his mother Beatriz Marina Moreira and his siblings, Jessica Moreira, Debora Cruz, Matthew Robinson... View Obituary & Service Information

The family of Mr Christopher (Chris) Moreira created this Life Tributes page to make it easy to share your memories.

Christopher passed away in Fontana, California in the early morning...

Send flowers to the Moreira family.