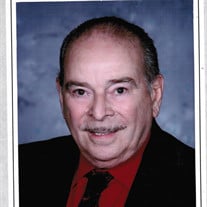 Antonio “Tony” Christopher Landaeta, October 12, 1934 to August 29, 2016. On the early morning of Monday August 29, Tony passed away in the comfort of his Victorville home after battling cancer for many years. He passed with his wife Mary Ellen by his side. Tony was 81 years old. Born in Brooklyn New York, he was one of 5 children to Cesar and Lucy Landaeta. He was preceded in death by his second wife Vivien and his three brothers, Joseph, William and Cesar. He is survived by his sister Lucy Morales. He proudly served in the US Navy and also as a NYC Police Officer. He held many manufacturing positions and was General Manager of a division of ERO Industries. He loved bowling, dancing, photography and electronics but most of all he loved family gatherings. Tony was a loving husband, father, uncle, grandfather, and “Boompa” (great grandfather). Tony had three chapters in his family life. In chapter one he has two children, Diane and Anthony (Tony). Diane and her husband Norman (deceased) have a daughter Erica. Tony and his wife Jo Ann have three daughters, Kristina, Stefanie and Deena. Tony’s great grandsons are Anthony and Joshua. Chapter two Tony had 2 more children with wife Vivien (deceased). Tony Jr. and Maria. Tony Jr. and his wife Deanna have two children, Gabrielle and Anthony. Tony’s great grandchildren are Preston and Paisley. Tony Jr. has two children from a previous marriage, Luana and Mitchell. Tony’s great granddaughter is Adrianna. Tony’s daughter Maria has a daughter Devon. Tony’s wife Vivien (deceased) has a daughter, Cheryl with grandchildren Autumn, Shannon and Robert and great grandchildren Jackie, Lauren, Shelby, Ava and Tatiana. In chapter 3 Tony accepted into his life his present wife, Mary Ellen’s family. Tony leaves behind many nieces and nephews. Tony had a real love for family and was so proud of all the children’s accomplishments. He was so proud to know he influenced so many generations of family. He also had a passion to help others in work and in his personal life mentoring and teaching skills that he knew. He had a real great sense of humor and a tendency to want to help others when he could. His very large family will truly miss him dearly!

Antonio &#8220;Tony&#8221; Christopher Landaeta, October 12, 1934 to August 29, 2016. On the early morning of Monday August 29, Tony passed away in the comfort of his Victorville home after battling cancer for many years. He passed with his... View Obituary & Service Information

The family of Mr Anthony Christopher Landaeta created this Life Tributes page to make it easy to share your memories.

Send flowers to the Landaeta family.